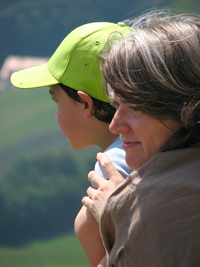 Hi, my name ist Heike Lindstedt, I was born in 1967 in Berlin.
I went to school at the J.F.K. German-American Community School in Berlin, where I was raised bilingual English/German from the age of 5.

After studying Industrial Design in Berlin I moved to Vienna, Austria in 1993.
Here I started the Shiatsu Training in 1999 at the E.S.I.
Since I received the diploma in 2004, I have attended several advanced training seminars, including the Postgraduate Courses at the Shiatsu College UK.

Currently I give shiatsu at my private practice - you will find me here.
I also give treatments to homeless women in a social health project "Gesundheit für wohnungslose Frauen" organized by FEM.

I am married, and I am mother of a teenage son.